Yoogane - A Curious Tale of the Missing Tteokbokki and Potato Slice

Two days ago my wife and I went to the Yoogane outlet at Nex for dinner.

We made use of the 50% discount for reservation via eatigo + our $10 voucher from eatigo for this meal.

I guess the dinner crowd is not in yet or simply people are not patronising because including us, only about 5 tables were occupied.

All I can say is going to this place was a wrong choice. 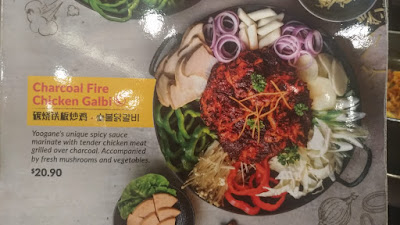 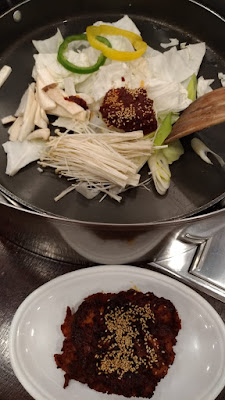 We ordered a 1 - 2 pax Charcoal Fire Chicken Galbi set which costs $20.90 and added a rice and noodles as sides.

After the dish arrived we were really surprised. It looks nothing like the picture in the menu.

The fact that there is only one piece of yellow and green bell pepper is not an issue since we don't eat that anyway.

But after we overcame our initial surprise we realised the tteokbokkis and potato slices shown in the menu are missing in our dish.

So I enquired with the waitress who was very helpful as she took a ladle and began digging into our dish seemingly to look for the ingredients.

Finally after a few rounds of digging, she seems satisfied that we were telling the truth.

And in what seems like an afterthought, she told us that the picture in the menu is for 5 - 6 pax and the portion for one person is 1 - 2 tteokbokki and potato slice each.

(we were thinking if that's the case, isn't that blatantly trying to mislead customers by placing the 5 - 6 pax portion picture in the 1 - 2 pax menu page?)

(i guess picture is really for illustration only but still...)

Anyway I told her okay but that still doesn't explain the missing items. Thankfully she agreed on that and told us she will get the kitchen to prepare the missing items and give us 'MORE' pieces. Yeah!

It is a grand total of 2 pcs of tteokbokki and 2 pcs of potato slices.

Yeah we finally got our missing tteokbokki and potato.

But wait. Didn't the waitress said she will give us more? So if 'more' means 2 pcs of tteokbokki and 2 pcs of potato slices, what does it means by 'normal' portion?

We didn't want to think too much so we hurriedly finish our food and went off.

When we made payment at the counter, we found out that our order for the noodle side dish was taken wrongly.

Anyway since they said the price for the 2 noodles is the same we leave at that because my annual quota for MSG has been exceeded after eating at Yoogane.

We have to get some drinks. At another place. Anywhere but Yoogane.

Would I go back again? Probably not.

I can't imagine paying $20.90 for that kind of food portion and I can't accept dishonest / misleading practices.

On a side note, if you wish to register for eatigo and get the voucher, you can refer to my post here.
Posted by JustASingaporeanSon at 18:27

Email ThisBlogThis!Share to TwitterShare to FacebookShare to Pinterest
Labels: Yoogane