The recent release of CapitaLand's latest financial results sent the share price downwards despite it being a decent set of results.

As I was thinking about this, it led me to the next questions.

Why is it that City Developments can be trading in the region of S$12+ while CapitaLand continues to languish at S$3+ and what are the differences between the two companies?

It piqued my interest as I have never delved into City Developments before and I set to find out more.

The comparisons gave me a big surprise.

City Developments Limited has a history of more than 50 years since their beginning in a small rented office in Amber Mansions on 7th September 1963.

They have since evolved into a Singapore-listed international real estate operating company with presence in 26 countries including Singapore, Australia, China, Japan, UK and rest of Europe.

One of their most recognised brands is the Millennium & Copthorne hotels chain.

CDL's core markets are UK, US, China, Japan and China.

CapitaLand group is a property company created from the merger of Pidemco Land and DBS Land in November 2000.

Since then CPL has grown to become one of Asia's largest real estate companies. Based and listed in Singapore, it is an owner and manager of a S$85 billion portfolio comprising integrated developments, shopping malls, serviced residences, offices, homes, REITs and funds in over 30 countries.

It is also one of the largest investment management businesses in Asia with 14 real estate private equity funds and 5 REITs worth over S$47 billion in assets under management.

CapitaLand acquired Raffles Holdings and The Ascott Group in 2006 and 2008 respectively and the latter is the world's largest international serviced residence owner-operator.

Singapore and China remain the two core markets of CPL, totalling 82% of the group's total assets.

Comparison of the Financial Figures 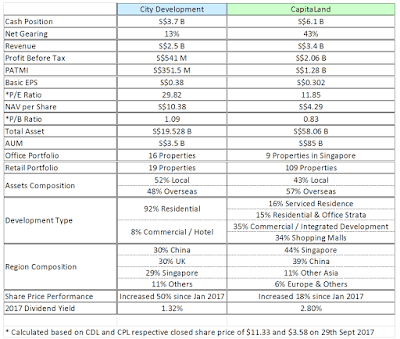 As mentioned earlier I have never studied CDL before. But inferring from the share price I expect the scale of their business to be much bigger than CapitaLand.

However this is exactly the opposite.

No matter which metric you look at - cash holding, revenue, PATMI, assets or AUM, CapitaLand is clearly the bigger player.

Exception is the EPS where CDL is slightly higher than CPL.

Note: Figures are from the 3Q17 financial reports of both companies.

I then did some quick calculations for the latest P/E and P/B ratios as a gauge of their valuation.

Again CPL is the winner here. In fact CPL is currently trading under book value whereas CDL is trading slightly above book.

These synergistic acquisitions are a move away from their traditional sources of income and it's nice to see this forward-looking direction of the management.

In the near term, CDL has several upcoming local residential projects including New Futura, a Tampines Ave 10 project and South Beach Residences.

Upcoming overseas residential projects include 1 in China, 7 in UK and 1 in Japan.

CDL also embarked on 2 projects in Australia for luxury retirement village development with expected completion in 2020 and 2021.

CPL is also set to continue their expansion in markets such as Vietnam and Indonesia. Their residential project in Vietnam - d'Edge is close to 100% sold.

Apart from the above, CPL has 6 management contracts in China to date as well.

It's good to see these new initiatives from CPL which show that the management is actively looking for new income sources.

On the serviced residences front, Ascott is on track to achieve their target of 80,000 units under management by 2020.

Beside the fact that both are real estate companies, City Developments and CapitaLand are also similar in terms of assets composition, development type and geographical composition.

In terms of business scale, CapitaLand is much bigger with significantly higher top and bottom lines compared to City Developments.

Shareholders make money either through dividends and / or capital appreciation.

Since both CDL and CPL are not fantastic dividend counters I will look at capital appreciation instead.

For capital to appreciate, the share price must appreciate. Simple.

Based on the basic valuation metrics, CapitaLand share price has much room for appreciation.

However since the share price has dropped after the release of 3Q17 results, is it because shareholders feel that the results are not comparable to the previous year?

This is what perplexes me. The company is earning more and generating more returns on the shareholders' investment but the market feels otherwise.

Can anyone enlighten me please?
Posted by JustASingaporeanSon at 13:23