Although the combined entity will be the 4th largest industrial REIT by asset value and 5th largest by market cap in Singapore, I hope the deal doesn't materialise.

The figures above sure look impressive.

However in my opinion the future outlook, portfolio quality and the performance of the REIT management are equally, if not more important.

Take a look at the following table. 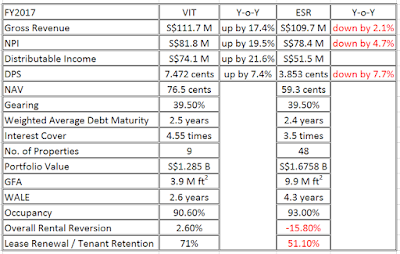 Gross revenue, NPI and DPU have been decreasing Y-o-Y for ESR whereas that of Viva Industrial Trust (VIT) have grown Y-o-Y. This is a testament of the REIT's manager strength.

Apart from the WALE and occupancy rate which are higher, ESR is going to be a drag on VIT.

Numbers don't lie. Though in some cases they do tell a different story. For example, the REIT's rental reversion depends on what type of leases they take into account. But this is topic for another day.

Since we are at rental reversion, let's look at the negative rental reversion of ESR and think about how this will impact the REIT price performance and dividend payout.

Comparing to ESR, I would say VIT performed much more admirably. Whether it's the distribution yield, revenue, NPI or rental reversion.

I also prefer the portfolio of VIT more than that of ESR. Except for 7000 AMK, the rest of the latter's portfolio doesn't conjure any excitement in me when I glanced through.

On the contrary I prefer the outlook for the two crown jewels of VIT: Viva Business Park and UE BizHub East.

Having said that, I do see something interesting for ESR with the Tuas mega port coming up in 2040.

ESR has a number of properties in Tuas among which one of them was acquired last year with 36 years remaining land lease.

If they can position themselves to make use of the mega port development, it should change the dynamics for them.

In summary unless there's something very positive that I missed out in ESR, I hope the deal doesn't goes through.
Posted by JustASingaporeanSon at 00:00